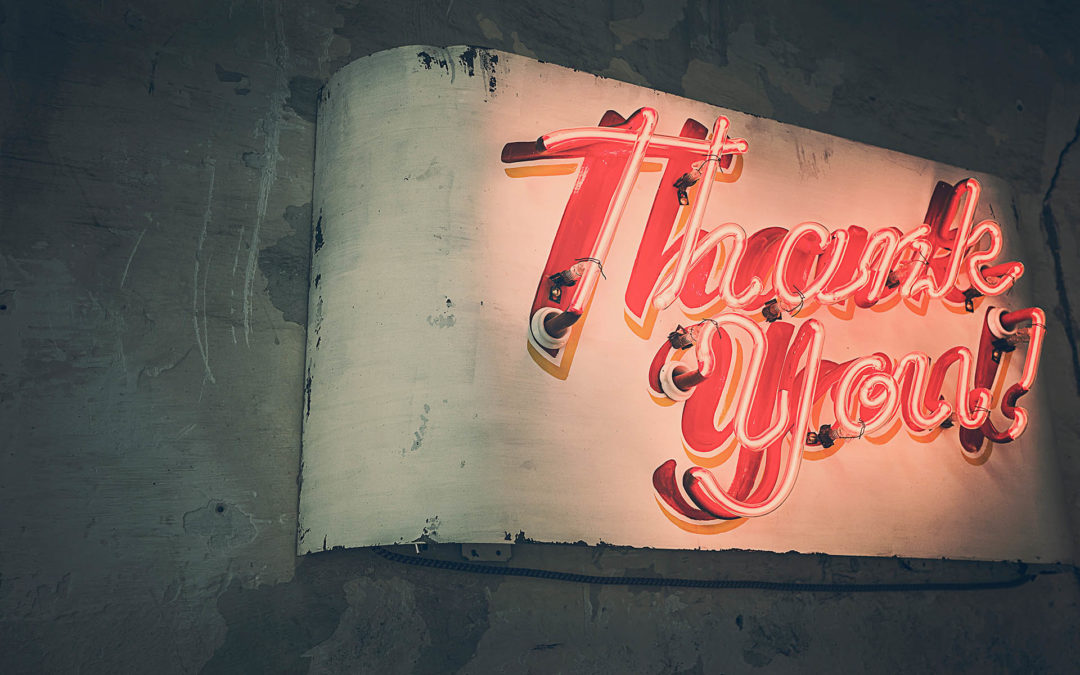 At the award ceremony when NBA superstar, Kevin Durant, was presented with the league’s most valuable player award, he didn’t take the opportunity to talk about the hard work he had put in or the years of dedication it had taken to reach such heights. Instead he thanked people individually. But not just a few people. He set out to recognize each person who had contributed to his success.

Over the 25 minutes he spoke, Durant thanked 42 people and included the specific contribution they had made to his success. He thanked veteran point guard, Derek Fisher, for his mentorship and also the team’s rookies for the energy when they came to the gym every day. He thanked coaches, team physical therapists, family and others who had made a difference in his life.

The team he played for, the Oklahoma Thunder, were a good team but in the face of stiff competition they actually overachieved that year. They did better than most people thought they would. And the reason they did this is because as a leader, Durant leveraged gratitude to enable his team to go above and beyond what they typically would have done.

The Power of Gratitude

The desire to be thanked in the workplace isn’t just the stuff of warm and fuzzies, either. Being shown gratitude by your boss strengthens the bottom line in a real dollars and cents way. A 2014 study by Moster.co.uk found that 58% of employees feel they don’t get thanked enough in the workplace which lead to feelings of under-appreciation and 41% of them feeling demotivated. It’s no secret demotivated employees aren’t as productive has happy ones but how do you measure that on the balance sheet?

Easily. Those employees who felt they hadn’t been thanked enough at work, wanted on average and extra $3,000 a year in salary for working in an environment where they aren’t thanked for their work. But those same employees said even a verbal thank you would negate the desire for a higher income. There probably isn’t a simpler way to boost your employee’s morale and lessen their desire for monetary compensation than by simply showing gratitude for doing their job.

It might be natural to conclude showing gratitude to employees only matters for lower and middle-income earners. They aren’t brining home big dollars and since being thanked in the workplace is proven to be the equivalent as monetary compensation it makes sense to dismiss it as being rudimentary for high-income earners. But it can be argued the impact of being shown gratitude on this group is even more compelling.
A poll conducted by the John Templeton Foundation found for those earning $150,000 or more per year, being shown gratitude in the workplace is just as evocative as “your right to vote.”

In plain language, for this group, being thanked in their workplace feels just as important as a fundamental building block of democracy. Sometimes it’s easier to appreciate something by going opposite so consider this: how would you feel if you woke up tomorrow and it was announced by the government you would no longer have the right to vote for the leaders of your country. How angry would you feel? What sense of injustice would be conjured up in your gut? That is how important being thanked in the workplace is for high-income earners.

How to Increase Your Capacity for Gratitude

The good news is the methodology for increasing your capacity for gratitude is the same for becoming grateful in the first place.

In one of Dr. Emmons studies he asked participants to keep journals and record either moments of gratitude, hassles or neutral life events. They recorded their mood, coping behaviours, health behaviours, physical symptoms and life behaviours. Those who kept a journal detailing what they had gratitude for found they felt better but also found it easier to express gratitude.

The journal entries weren’t complicated. Entries ranged from “Woke up this morning,” through “I live close to my family,” and “Saw grandson get first haircut.” So a simple first step to increasing your capacity for gratitude is to start keeping a gratitude journal. Find a book or open note taking software and everyday, write down three things you’re grateful for. To increase the effectiveness of this exercise, don’t stop at just writing down your three items, take time to think about them, relish in them and enjoy them in your mind.

If you’re reading this and thinking it’s a bit too touchy feely for you don’t fret it. No one has to know you’re keeping a gratitude journal and what you write down doesn’t have to include entries like “Soft kittens,” or “the smell of pistachio muffins as I lazily stroll down the boulevard.”
The entries can just as easily be “Watched my favourite team come back from a huge second half deficit,” or “Killed it in my quarterly presentation to the executive team.”

The key is to treat this exercise with purpose. Keep it off your to-do list because if you are honest about increasing your capacity for gratitude you don’t want it mingling next to things like “pick up eggs and bread for dinner.” For journaling to be effective you have to commit yourself to wanting to be more effective. If you just go through the motions it won’t have the deep and lasting effect and is tantamount to not having done it at all.